Our first event of 2023 will be a Choral Workshop, featuring the Duruflé Requiem at the Church of St. Vedast Alias Foster, in the heart of the City of London.

This is the first time we have put on a workshop event featuring just one big work, and it comes in response to a post that we put out, asking “If you could spend a day singing your favourite music, what would it be?” Many people replied that this marvelous work would definitely be on their list.

We have booked a superb venue for this event. With pews running in rows along the length of the church, and facing inwards, we will really feel we are part of something much bigger than ourselves.

The Parish of St Vedast is known from the 12th century, and the church is traditionally claimed to have been established by 1170.
It has been altered, enlarged and restored many times and probably rebuilt at least twice, the last time by Christopher Wren, after the Great Fire of London in 1666. Having been completely burnt out during the Blitz of World War II, the church was restored under the direction of its Rector, Canon Mortlock, and a very influential Parochial Church Council that included Poet Laureate John Betjeman and master organ builder, Noel Mander.

The church is dedicated to a French saint, little known in Britain, who was Bishop of Arras in northern Gaul around the turn of the 6th century. Vedast, who was called in Latin, Vedastus; in Norman, Vaast;  in Walloon, Waast; and in French, Gast 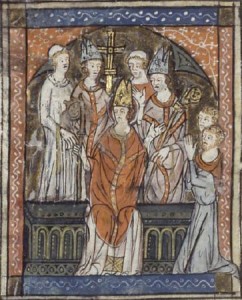 on, helped to restore the Christian Church in the region after decades of destruction by invading tribes during the late Roman Empire and to convert Clovis, the Frankish king. Remembered for his charity, meekness and patience, he is buried at Arras cathedral.

His name in England has been corrupted from St Vaast, by way of Vastes, Fastes, Faster, Fauster and Forster to Foster, the name of the lane at the front of the church, and the reason that the official designation of the church is St Vedast-alias-Foster. St Vedast was venerated in particular by the Augustinian priors in the 12th century, and they may be responsible for the foundation of the few churches dedicated to him. Only one other church in England is currently dedicated to St Vedast, in Tathwell, Lincolnshire, a third parish in Norwich now being remembered only in a street name.
Some of the works and legends of St Vedast are celebrated in the stained glass windows of the church.

At They Shall Laugh and Sing/Choral Holidays, we try to do everything a little bit differently from what you might find elsewhere. This event will be no exception.

The day will begin with a group warm up/singing lesson, led by our Artistic Director, Jeff Stewart. He is an international opera and concert soloist, who has also sung in and directed choirs for most of his life.

They Shall Laugh and Sing courses bring a unique perspective into choral music, replacing the many myths about vocal technique in choral music with solid Belcanto principles, which enable choral singers to become a better, more expressive version of themselves. We focus on getting the drama out of any piece of music, so that we can make it not only a beautiful performance of a work, but also a vocal sculpture which can inspire, move and elevate singers and listeners to new heights.

We hope that you will not only feel you have spent a day making glorious music in an exquisite building, but that you have learned and experienced something that has led your singing, and your ability to express yourself, to a new level.

Ben Saul will be joining us for the day to accompany the Requiem on the renowned Harris and Byfield organ, which has quite a history itself.

The morning session will commence at 11am. Lunch will be from 1pm – 2.30pm and we will have a short break mid-afternoon before at full run though at 5pm, with professional soloists. We will be finished by 6pm.

The fee for the day is £65.00 (£30 Non-refundable deposit) which includes hire of the vocal score for the day, and your tuition. We will also provide tea, coffee and biscuits in breaks.

We look forward to welcoming you on this course and to joining you in some of the most sublime music ever written.

u could get a 10% discount on this event

by joining the They Shall Laugh and Sing VIP Group

Click the logo to find out more about the benefits of joining.

Our aim with choirs is to help the singers to find the best in their voices and teach them how to be really expressive through choral music. We have a lot of fun. Laughter is so important in finding the freedom to really express ourselves.